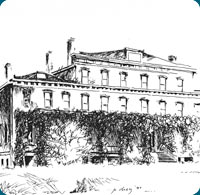 In 1927, the Carl Vinson Institute of Government opened its doors to "provide a forum to study international, national, state and local affairs and to make recommendations for improved governance." Then called the Institute of Public Affairs, the Institute was a unique organization that combined research, technical assistance, training and publications. It was established at the University of Georgia at a time when the university had only 1,500 students and the state population was a modest 2.8 million.

Over the next two decades, Georgia's population grew and so did the needs of its citizens. In 1938, the Institute of Public Affairs took on a larger role as the Institute for the Study of Georgia Problems. Its public service activities ranged from holding forums on constitutional reform to publishing studies on county road administration, forms of government and voter registration.

In 1943, the University of Georgia created the Bureau of Public Administration, coinciding with the extensive reform of state government by Gov. Ellis Arnall and employing the service of political science faculty to teach short courses to local government officials. This unit merged with the Institute for the Study of Georgia Problems in 1953 to become the Institute of Law and Government.

The first Biennial Institute for Georgia Legislators was conducted by the Institute in 1958, and it remains one of the longest-running educational programs for legislators in the country.

Today, as the university's enrollment nears 40,000 and the state population approaches 11 million, the Institute of Government continues to help improve the quality of life in Georgia by bringing the resources and expertise of the university to bear on the issues and challenges facing the state.

Drawing upon the knowledge and resources of the University of Georgia, the Institute of Government provides education, assistance, research, policy analysis, publications and technology solutions to assist public officials in serving citizens in Georgia and throughout the world.

About the Lucy Cobb Complex

The elegant buildings of the historic Lucy Cobb Institute in Athens, Georgia, serve as the central headquarters of the Carl Vinson Institute of Government.

Opened in 1859, the Lucy Cobb Institute was considered one of the nation's best girls' schools until its closing in 1931.

In 1984, restoration of the buildings began when President Ronald Reagan signed a bill that included an appropriation to support renovation of the Lucy Cobb Institute as the new home of the Carl Vinson Institute of Government. The renovation project—with the exception of the Seney-Stovall Chapel, the "crown jewel" of the complex—was completed in 1991.

Restoration of the chapel was completed in December 1997 through funding provided by private donations and allocations from the University of Georgia. The private fund-raising effort was spearheaded by the Friends of Lucy Cobb and Seney-Stovall.

We celebrated our 90th Anniversary year in 2017 and are proud to share testimonials from our clients, stakeholders and friends. These testimonies show the projects we have worked on, the lives we have touched and the impact we have made in Georgia and beyond.

< Back
< Back
Menu
Close
Toggle navigation
©